By Drew Buys, Alumni at the University of Wisconsin-Madison

This is the second in a three part series on the European Neighborhood Policy as a framework for European Union foreign policy for nearby countries that are not on the membership agenda.

Originally published on HuffPost Contributor on behalf of European Horizons

The Eastern Partnership (EaP) is a subsection of the European Union (EU) European Neighborhood Policy (ENP) that focuses on EU relations with Armenia, Azerbaijan, Belarus, Georgia, Moldova, and Ukraine. Like other ENP countries, the EaP countries are being offered greater political and economic ties to the European Union without an offer of membership. 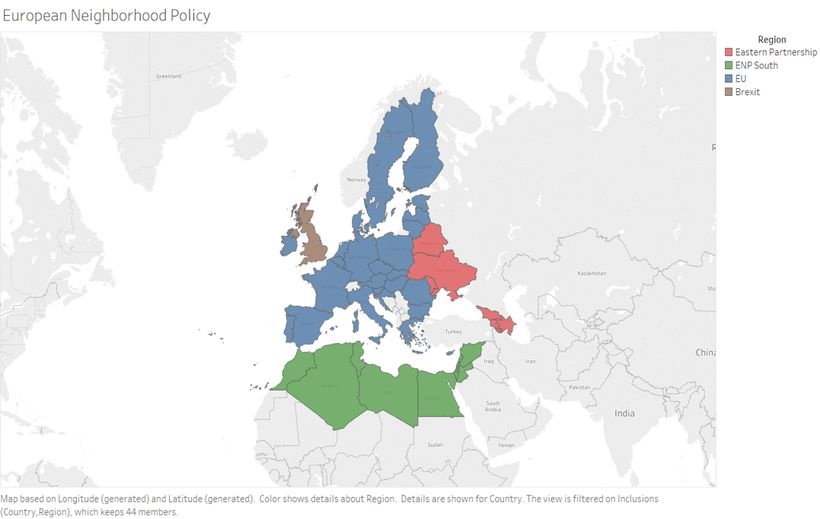 The EaP was founded in 2009 in Prague at a Summit attended by the Presidents of the European Council and European Commission, as well as representatives from all six partner countries and all 27 EU members (Croatia joined in 2013), with the intention of guiding EU aid and foreign policy in its East and coordinating regional political, economic and developmental projects. These regionally focused projects of the EaP are implemented in addition to the bilateral goals of the EU and an ENP partner country, not in place of them.

Over the first few years of the EaP, many of the regional initiatives were centered on energy and security. The EU sponsored projects on energy related environmental issues and energy market integration in 2007 and on energy saving and gas distribution in 2008. Security projects during that period included land mine removal, disaster prevention, and border management systems in the South Caucasus. More recent projects have moved away from this focus. Although there are still initiatives related to energy policy, there are far more that deal with the development of civil society through education and institutional changes.

The regional goals of the EaP are only one part of what the EU hopes to accomplish through it. There are still many millions of euros spent on bilateral projects. When it comes to these bilateral initiatives, there are different levels of association for partner countries. Georgia, Moldova and Ukraine are more integrated with the European Union. All three have Association Agreements and Deep and Comprehensive Free Trade Agreements with the EU. Azerbaijan and Armenia have active action plans but lack free trade agreements. And, finally, there is Belarus. Belarus, which first signed a partnership agreement with the EU in the mid-1990s has yet to become an active member with a current action plan.

However, the lack of an action plan does not mean that Belarus doesn’t work with the EU—or that it doesn’t receive any aid. As seen in the graph below, there is some relationship between how well a country is implementing its action plan and how much aid it receives. No country goes without, but there are significant rewards for the countries that make the most progress towards integrating with the EU. The three countries that receive the most aid are the three countries that have concluded Deep and Comprehensive Free Trade Agreements.

Ukraine, of course, is an outlier in this table. Even if its numbers were reported for the same time period, it would be receiving far more than any other country in the EaP and could receive up to a fifth of the total European Neighborhood Policy budget. This stems from the economic situation in Ukraine brought on both by its financial and political mismanagement in the early part of the decade and by its conflict with Russia, which both spurred greater European Union involvement in the country

Russia looms large over all of these countries, not only in their relationships with the EU, but also in their domestic politics and respective security situations. In all six countries one of the major fissures in domestic party politics is a divide between being pro-EU and pro-Russia. Georgia, Moldova and Ukraine all have Russian troops on their soil. For many, any further move towards the European Union risks retaliation from Russia as Vladimir Putin loses his grip of Russia’s traditional sphere of influence.

This is likely why many of the early regional programs through the EaP focused so much on energy policy. One of Russia’s largest levers on the countries of the EaP is its position as the major provider of the natural gas and oil that fuels their homes and industry. Many of the European Union’s easternmost members are susceptible to this pressure from Russia as well, so the joint energy policy work done by the EaP is one that appeals strongly both to EU partner states and EU members like Poland and the Baltics.

Has the EaP worked?

Although there are some signs of positive progress in Georgia, Moldova and Ukraine, these countries continue to struggle with slow reforms and Russian meddling in local politics that attempts to further slow reforms. It’s also worth noting that the three countries that have made the most progress and received the most money are also the three countries whose sovereignty is most directly under attack by Russia. In the case of Georgia and Ukraine, there is an argument to be made that Russia’s intervention would not have happened had they not moved so deliberately towards the EU and NATO. In a conflict that did not include Russia, Armenia and Azerbaijan fought a skirmish in 2016 over the disputed territory of Nagorno-Karabakh. In terms of stability, the Eastern neighborhood is definitely worse off than when the EaP was started.

The results are better economically. All six EaP countries have shown significant growth since 2009, though the importance of this measure is complicated somewhat by the Great Recession of 2008-2009.

Georgian citizens joined Moldovans last month in their ability to travel visa free for 90 days in the Schengen Area and Ukrainians that hold biometric passports look will likely join them by the end of the year. There has been little progress in this area by Armenia, Azerbaijan or Belarus.

The next Eastern Partnership Summit will take place this November in Brussels. EU High Representative Federica Mogherini has said that the focus will be on concrete progress in four priority areas laid out in an EaP working document: economic development and market opportunities, strengthening institutions and good governance, connectivity, energy efficiency and climate change, and mobility and people-to-people costs. These are really broad policy areas, so I’ll highlight a few things to watch.

Borders: Increased cooperation on border controls and security would suit both the EU and many of the partner states. These measures would help address migrant concerns in the EU by exporting some of the patrols outside of Europe in a similar way to the deal with Turkey does. If people are stopped earlier, they aren’t a problem in Europe. The EU has also urged several EaP states to crack down on human trafficking, and increased border security would help in this regard as well. For the EaP partners this is a way to purchase new technology they couldn’t otherwise afford that will be helpful for law enforcement and may help them keep track of any Russian hijinks.

Energy: Although energy prices are lower now than they were in the late 2000s when the EaP had more energy policy initiatives, it is one way to help shield both partner states and Member States from Russian influence. The EU has taken steps to complete a natural gas pipeline from Israel to Cyprus, Greece and Italy. Some cooperation with Georgia and Azerbaijan for purchasing Azerbaijani resources could be on EU minds.

Youth Outreach and Education: Finally, with the proliferation of fake news, youth outreach and education has been an important topic worldwide. What the EU has tried to do with some of its Erasmus programs, including the one that funds European Horizons, is to get young people excited about the European Union, European identity and European ideals. A couple of the broader EaP programs from the last few years have been enacted in this vein, and I expect it will be something that interests the EU now as a way to fight the information war with Russia.

A Battle for the Future: How the COVID-19 recovery package is causing disruption within the EU

written by Oliver Zarp-Karsholt. “Europe will be forged in crises” (Monnet 1976) – those were the words of Jean Monnet, although the forging has not gone well in recent years. The handling of the 2008

Is the transatlantic partnership in decline?